A dark comedy about living together.

After his father’s death, autofiction writer Rock Robichaud finds himself against his will back in his hometown, where he hasn’t set foot in two decades. At age 24, he penned a bestselling book entitled LE TROU DU CUL DU MONDE, a joyful yet scathing account of the first 20 years of his life. Though a runaway success, the book was a knife in the back to the town’s inhabitants. Forced to honour his father’s last wishes, Rock reconnects with his hometown and begins to feel inspired to write a new novel. 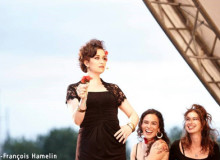